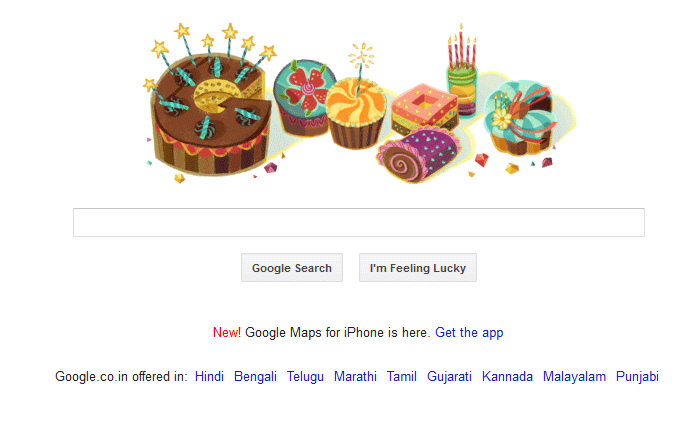 Google says happy birthday to you with a doodle

If today is your birthday login to your account and visit the Google.com web page. A special happy birthday doodle for you from Google will be waiting for you on the home page of goo ogle.  The doodle is linked to your Google plus profile As one of the most innovative companies in the world their marketing strategies are class apart from the rest.  Google is dominating internet with a chain of products. One of the most recent innovation from them is the google authenticator, which increases the security of selected web products with two factor verification.

Google has a tradition of creating April Fools’ Day jokes.

1. Google MentalPlex allegedly used the power of mind to search the web.

2. In 2007, Google announced a free Internet service called TiSP, or Toilet Internet Service Provider, where connection is obtained by flushing one end of a fiber-optic cable down their toilet. speed offered was 8 Mbit/s

3. Again in 2007,  Gmail page displayed a new feature called Gmail Paper, which allowing users to have email messages printed and shipped to them.

4. In 2008 Google announced Gmail Custom time where users could change the time that the email was sent. That is pre date the mail and make it appear as read.

5. In 2010, Google jokingly changed its company name to Topeka in honor of Topeka, Kansas, whose mayor actually changed the city’s name to Google for a short amount of time in an attempt to sway Google’s decision in its new Google Fiber Project.

6. In 2011, Google announced Gmail Motion, an interactive way of controlling Gmail and the computer with body movements via the user’s webcam.

1. Google included the Swedish Chef’s “Bork bork bork,” Pig Latin, “Hacker” or leetspeak, Elmer Fudd, Pirate, and Klingon as language selections for its search engine.In addition, the search engine calculator provides the Answer to the Ultimate Question of Life, the Universe, and Everything from Douglas Adams’ The Hitchhiker’s Guide to the Galaxy.

2. Furthermore, when searching the word “recursion”, the spell-checker’s result for the properly spelled word is exactly the same word, creating a recursive link.

3. Likewise, when searching for the word “anagram,” meaning a rearrangement of letters from one word to form other valid words, Google’s suggestion feature displays “Did you mean: nag a ram?”

4. In Google Maps, searching for directions between places separated by large bodies of water, such as Los Angeles and Tokyo, results in instructions to “kayak across the Pacific Ocean.”

5. During FIFA World Cup 2010, search queries like “World Cup”, “FIFA”, etc. caused the “Goooo…gle” page indicator at the bottom of every result page to read “Goooo…al!” instead.

6. Typing in ‘Do a barrel roll‘ in the search engine will make the page do a 360° rotation.

7. Google Book Search Scratch and Sniff.  Users were asked to “…please place your nose near the monitor and click ‘Go'”, which then “loads odors”.

8. Life size Picasa  Google offered an option which allows the user to print lifesize cardboard cutouts of all of their photos
Read more