Skip to content
Kerala
October 16, 2010September 18, 2014 Suraj Kumar 0 Comments travel
Kerala is the south-western end of India. The state is bordered by Karnataka to the north, Tamil Nadu to the south and the east and the Arabian Sea to the west. Thiruvananthapuram is the capital and Kochi is the largest city.
Attractions

Kerala is one of the most popular tourist destinations. Main attractions of Kerala are its Ayurveda Heritage (Alternate treatment and medicine using natural herbs and oils made of plants, flowers and herbs), Low cost of medical treatment, back waters, beaches, hill station, tropical greenery, monsoon tourism and spices. It is one of most literate and least corrupt state (sorry to say but, Corruption is a part of Indian life style ;-))
Main attractions in the state are the beaches at Kovalam, Cherai, Varkala, Kappad, Muzhappilangad and Bekal. The hill stations of Munnar, Nelliampathi, Ponmudi and Wayanad. National parks and wildlife sanctuaries at Periyar, Muthanga and Eravikulam. The network of interlocking rivers, lakes, and canals that center on Alleppey, Kollam. Heritage sites like Padmanabhapuram Palace, Varkala Papanasini (where you can washout all your sins), Sabarimala (Basically a pilgrim center) and Eco tourism spots mainly forests. 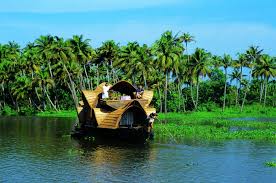 Most of India’s water ways are in Kerala. Vembanad Lake is the largest one beautifies Alleppy by its sheer vastness. It is famous for its forty one west flowing and three east flowing rivers. Periyar, the Bharathapuzha, the Pamba, the Chaliyar, the Kadalundipuzha River, the Valapattanam, and the Achankovil are the main rivers (I have an emotional attachment to Achenkovil as it flows through my backyards). The Western Ghats form a wall of mountains surrounding the state contributing to its heavy rain fall. Anamudi (Meaning elephant’s brow in Malayalam) is the highest peak and others are Agastyamala and Anamala.

Standard dish of Kerala is a sadhya (feast) on green banana leaves, consists of mainly rice, three separate curries and around nine vegetable dishes and more than one sweet dish (Payasam). Other main dishes especially for breakfast are idly, Dosa, Puttu, Idiyappam, Paalappam (or simply appam), vellayappam. I will describe all these food items and more in my following posts.

Climate
Average temperature ranges from 20 °C in hill areas to 32 °C in plain lands. Mean annual temperature is around 24°C. Climate is humid through out the year with around five months of rain fall. The best time to visit Kerala is from November to May (Especially for beaches) and Rest of months are suitable if you are interested in monsoon tourism or honeymoon trips.
Miscellaneous

More than 50% follow Hinduism, 25% Islam and Rest Christianity
How to reach
By Train
Kerala’s major railway stations are Palakkad, Kozhikodu, Shornur, Thrissur, Ernakulam (for Kochi), Kottayam, Chengannur, Kollam, and Thiruvananthapuram. I recommend to get down at Palakkad or better come by Konkan route and get down at Calicut explore down yill Kanyakumari
By Air

The state has three major international airports at Thiruvananthapuram, Kochi, and Kozhikode. 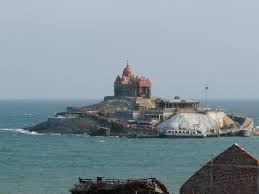 If you are visiting Kerala I’ll recommend you to get a flight to Thiruvananthapuram and start Exploring from Kanyakumari the bottom most part of India, which is an exotic beach with multicolored sand and seawater. Most famous for Thriveni Sangam, Meeting Place of Indian Ocean, Arabian Sea and Bay of Bengal. White, blue and Grey waters merge at this point. Sunset of Kanyakumari is an experience. Don’t forget to take a boat to Vivekananda temple situated on a rock in the sea