Thiruvananthapuram is the state capital and very near to Kanyakumari our first destination. The main attractions of the city are
Sree Anantha Padmanabha Swamy Temple

Sree Anantha Padmanabha Swamy Temple is Lord Vishnu temple, and situated in east fort (Kizhakke Kotta).The temple is a seven storied building situated next to a big pond named Padma theertham. It is famous for its ancient sculptured stone pillars and stone carvings. The Garbhagriha or sanctum sanctorum is carved out of a single stone. The deity can be viewed through three doors – Face of the Lord and Siva Linga underneath his hand in the first door, Brahma seated on lotus emanating from the Lord’s navel along with the “Utsava moorthi” and idols of Lord MahaVishnu, Sreedevi and Bhoodevi in the second door and the Lord’s feet in the third door. Only the King of Travancore may perform Namaskaram, or bow prostrate on this “Ottakkal Mandapam”. Since the idol of the Lord is also on this “Ottakkal Mandapam”, anybody who bows prostrate, or any material object that is kept here, henceforth belongs to the Lord. Here, the King is called a “Padmanabha Dasa”, or a “servant” of Vishnu. Adherents believe that it is actually Vishnu who rules the state of Tranvacore (Thiruvithamkoor in Malayalam, It comprised most of southern Kerala, the Kanyakumari district, and the southernmost parts of Tamil Nadu). A unique feature of the Padmanabha Swamy temple is that it has idols in reclining, sitting and standing postures. The main idol is inside the sanctum sanctorum is in the reclining posture, the idol viewed through the central door in the standing posture, and the “Utsava Murthi”, the idol taken out for the festival processions is in the sitting posture. 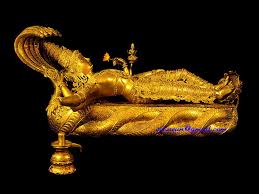 A unique feature that came to light recently, while cleaning the idol is the fact that Lord Padmanabha’s idol is entirely cast in gold except for the face and chest. . The crown of the Lord along with ear rings, the huge Salagrama, a precious sacred stone symbolizing God Vishnu And chiseled poonool are in gold. The various ornaments covering the chest, the entire length of the Lord’s legs and the right hand sporting a huge kankanam, the left hand holding a lotus are in gold. The stalk of the lotus rising out of the naval is also in gold, it is said that all the gold and valuables are used to make the idol and Katu sarkara yogam (covering the idol with a dark colored ayurvedic paste) was used to hide it from the Muslim invaders

During the festival processions at Sree Padmanabhaswami temple the head of the royal family of the erstwhile Travancore kingdom still escorts the idols donning his traditional attire.

Another biggest festival associated with this temple is the “Lakshadeepam” (lighting of a hundred thousand lamps),
the grand spectacle of lights marking the culmination of the 56-day Murajapam (a 56-day long event of chanting of Vedas). On this day, the entire temple is lit with oil lamps and in its glittering background Lord Vishnu, Lord Narasimha and Lord Krishna are taken out on Garudavahana (eagle shaped chariot) in a grand procession. The reflection of the bright temple building in the pond Padma theertham is a grand spectacle
The first `Lakshadeepam’ was performed in 1750, last was on January 2008 and next is due on January 2014.
In the October/November months (During Dussera / Navarathri) of every year, Navarathri Festival of musical concerts is held at the Navarathri Mandapam, adjacent to the main building of the temple. Only Hindus are allowed inside and dress regulations are strictly followed, Men has to wear dhoti instead of trousers with bare upper torso and no pant or churidhar for ladies, only sari or pavada (lehanga) is allowed.

The dresses are available outside temple on rent.
In 2011, the Supreme Court of India directed the authorities from the fire services and archeology department to open the secret (sanctum sanctorum) chambers of the temple for inspection and accounting of the items kept inside. The inspections at the temple began after the Supreme Court set aside a Kerala High Court order that the state government take over the temple, but asked for the inventory of its assets. The high court order was given after a local lawyer, Sundar Rajan, petitioned it because, he alleged, the trust running the temple did not have the capacity to ensure the security of its assets. On 2 July 2011, approximately

500 billion (US$11.15 billion) worth of gold, jewels, and other treasures were unearthed in the vaults of the temple. Several 18th century Napoleonic era coins, a three-and-a-half feet tall gold idol of Mahavishnu studded with rubies and emeralds, and ceremonial attire for adorning the deity in the form of 16-part gold anki weighing almost 30 kilograms (66 lb) together with gold coconut shells, one studded with rubies and emeralds.
This revelation has solidified the status of the Padmanabhaswamy temple as one of the wealthiest temples in India and with the final estimate of the wealth, it might become the richest temple in the world. If the antique value is taken into account, this treasure will be worth ten times the current market price.
The treasure is thought to have been in the temple for more than one hundred years, having been put there by traders, pilgrims and royals such as the maharajahs of Travancore. While some Historians have suggested that a major chunk of the stored riches reached the kings in the form of tax, gifts, as well as conquered wealth of conquered states and temples stocked in the temple for safekeeping.. Morrocan traveller Ibn Batuta visited Tenavaram in the 14th century and described the Vishnu idol here as being made of gold and the size of a man with two large rubies as eyes “that lit up like lanterns during the night.” All people living within the vicinity of the temple and who visited it were fed with monetary endowments that were made to the idol.
The findings represent the highest valued assets at present, saved in secret chambers by the royal families.
The temple has 6 vaults (Kallaras), labeled as A to F for book keeping purpose by the Court, that are hidden under the sanctum sanctorum. While vaults A and B have been unopened over the past 130 years, vaults C to F have been opened from time to time. The two priests of the temple, the ‘Periya Nambi’ and the ‘Thekkedom Nambi’, are the custodians of the four vaults, C to F, which are opened periodically. The Supreme Court had directed that “the existing practices, procedures and rituals” of the temple be followed while opening vaults C to F and using the articles inside. Vaults A and B shall be opened only for the purpose of making an inventory of the articles and then closed.
On July 4, 2011 the seven-member expert team which is taking stock of the assets at temple decided to postpone opening of the secret chamber marked ‘B’ till they obtained more expert opinion as preliminary examination of its gates had found the vault to be secured with iron shutters making experts wonder what lay inside. The royal family said that many legends were attached to the temple and that chamber B has a model of a snake on the main door and opening it could be a bad omen.Seven-member team will consult with some more experts on July 8, 2011 and a then they may take the final decision on opening of chamber ‘B’.
There had been an earlier inventory of at least one vault. A vault was opened in the presence of Sree Chithira Thirunal Balarama Varma, then the Maharaja of the state of Travancore on Sunday, December 6, 1931, Among the contents found were gold and silver coins stored in a “granary like thing,” four brass chests of coins, over 300 gold pots, and a six-chambered wooden chest containing jewels decorated with diamonds, rubies, emeralds and other precious stones. Four coffers were removed and taken to the palace treasury for counting and valuation.

The shrine is currently run by a trust headed by the erstwhile royal family of Travancore. Who considered themselves as sreepadmanabha dasa (servents of sreepadmanabha)

One thought on “Ananthapadmanabha Temple”