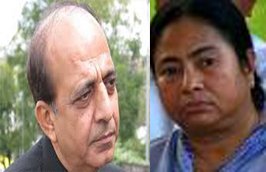 The railway budget is finally out, Mr Dinesh Trivedi of Trinamool Congress presented the budget and party leader Ms Mamata Banarjee has to relay on television to find out the outcome of budget.

Just as in the case of any other policies or steps from Congress, She already rejected the budget and demanded a roll back in fare hype.
Ms Mamata Banarjee is only concerned about state politics. All these publicity gimmicks is just an eye wash, She is compete ting  for the Prime minister chair by leading the 3rd front along with Mr Mulayam Singh Yadav, who already sacrificed the chief minister post targeting  the same chair

Ms Mamata Banarjee and Mr Dinesh trivedi both from the same party, is acting out their part from the pre decided script. Mr Trivedi in his early days applied for admission in pune film institute got the acting talent. But it is the Ms Banarjee who surprised everyone with her natural acting talent

Mr Dinesh Trivedi is just obeying the orders from Ms Banarjee, who is playing the dirty politics, without any vision or outlook apart from gaining maximum seats from west Bengal by any means. She is expecting to be presented herself as a sympathizer for the Bengal, and the only leader dare to fight with her own cabinet minister.
As it is a scripted drama, Mr Trivedi has to have an exit plan.

It could be a resignation, as it doesn’t matters much because, any way Ms Mamata Banarjee is trying her best to pull down the Manmohan Singh  government. After all these episodes Mr trivedi will sworn in as a state minister.

Second option is scrap the fare hike in lower class, It will harm railways plans and will be a bad precedence.

As of todays Ms Mamata Banarjee wants Mr Mukul Roy to be the successor of Mr Trivedi, We should appreciate the Didi's dedication and commitment towards the poor cattle class Indians. This same Mukld Roy was officiating Railway minister and was  sacked as he refused to visit the railway twin accident site in Assam.

It is an old news of 12 Jul 2011 "Mukul Roy, the Minister of State in the Railway Ministry has stayed aloof from the twin train disasters. On Monday, Jul 11 Roy remained non-committal though PM Manmohan Singh directed him to visit the train accident site in Assam. But, Roy giving a cold shoulder to PM's direction, chose to accompany his party chief, Trinamool Congress leader Mamata Banerjee to Jangalmahal." There is no doubt  he will be faithfull to Ms Mamata.

Any way Ms mamata has to go. We can expect our new railway minister either Mr Mulayam Singh Yadav or Ms Mayavati ( as soon as she reaches Rajyasabha)

Whata ever happens congress is ready to stoop to extreme levels just to save the government, so the poor common man will not be burdened by a mid term poll. I can't wait to see  Rahulji cracking jokes to Mr Mulayam Sing Yadav and Ms Mayavati , sitting on his either side in parliament